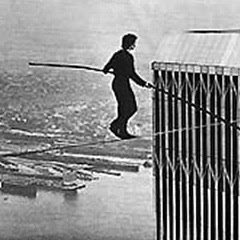 Every Tuesday night, a motley and miscellaneous assortment of my nearest and dearest converge on Newtown for what we affectionately call Club Dendy. As chief social planner of the gaggle, we see what tickles my fancy. So far, I have an impeccable track record, the highlight of which has probably been 'Persepolis.' Tonight, however, I have outdone myself.
'Man On Wire' is the tale of Philippe Petit, and chronicles his 1974 high wire walk between the Twin Towers of the World Trade Centre. It's the kind of film for which cliches are not cheesy, but adept. I was on the edge of my seat, my heart was in my mouth, I saw stars.
But this was no thriller - 'Man On Wire' is a documentary. A beautiful, breathtaking film, and one that, hours later, still has me gasping and gushing in equal quantities. In case you need further convincing, at least 15 minutes after the film ended, I realised that we were still sitting in the cinema, frantically discussing what we had just seen. And we were not the only ones... The darkened room was still crowded - our co-witnesses were doing the same.
Incredible.
Posted by Patsy Galore at 11:25 PM