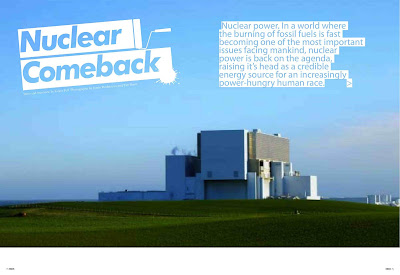 So impressed were we with Justin Pemberton's sublime documentary The Nuclear Comeback when we first came across it in 2007 that we dedicated no less than 6 full pages to the story in Issue 6 of Black Magazine. It seems we haven't been the only ones to be impressed by this masterful piece of NZ documentary film-making. The film has just picked up a major international prize, winning Best International Documentary at the The Cinemambiente Awards. The prestigious awards are judged by a panel of international environmentalists and renowned filmmakers in Turin, Italy and attended by many Italian politicians - including the Italian Minister for the Environment. Awarded this week, the gong is the latest triumph for The Nuclear Comeback, which has already been selected for ten top international film festivals, and notched up an exceptional global sales record - including a prized sale to the Sundance Channel in the US.

"A truly important film about the most important environmental issue of our times, the fraught decision about how we produce our energy." - Cinemambiente 2008

"Like the best documentaries, it is engaging, nuanced and avoids preaching." - Leo Hickman, The Guardian

Our congratulations go out to Justin Pemberton and the crew. International Sales are handled by: Films Transit International Inc. http://www.filmstransit.com/
Posted by Front Grill at 1:23 PM