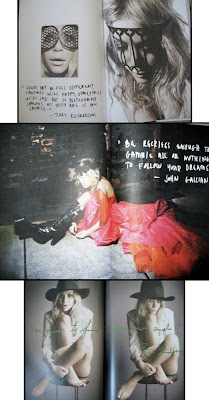 While most slashes are content to stop at actor / waiter, the Olsens have turned teeny tiny stardom into an empire worthy of the Forbes celebrity rich list, decades after they actually filmed anything worth watching. I mean, seriously, the most recent big screen listing for them on Wiki was in 2004 for something called 'New York Minute,' where they played - wait for it - twins.
Ok, I just read the article more closely and apparently one or the other also appeared in 'Factory Girl' (didn't notice, too busy cringeing at Sienna Miller slaughtering my Edie) and the TV series 'Weeds,' plus have films with Ben Kingsley and Billy Bob Thornton coming out this year. So I'm a little bit wrong, but you get the gist.
So the whole point of this was to tell you that now on top of their acting / fashion design / other infamous personal stuff that we will not mention (wrong blog honey, try Perez) Mary-Kate and Ashley have just released a coffee table book.
In it, they interview 22 figures they consider to be influential, from Christian Louboutin to Karl Lagerfeld, Lauren Hutton and Terry Richardson in a tome they've called, whoa, 'Influential.'
Photo heavy, it's full of personal momentos, snap shots and traverses Fashion, Art, Design and Giving Back. Um... Anyway, from all reports it's a beautiful book, and judging from the pics (including above) I'd have to agree.

Available now on http://www.amazon.com/
Posted by Patsy Galore at 7:49 PM