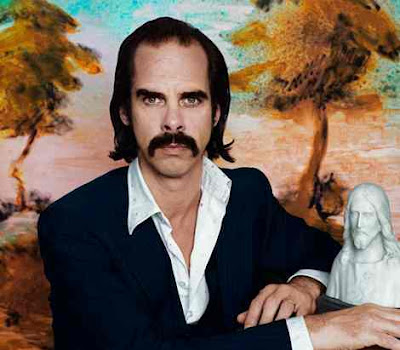 Summer is festival time there is no doubt and this summer down under there are quite a few goodies to think about attending but one, more than any other, captures our attention. All Tomorrow's Parties is of course the title of a classic Velvet Underground tune but it is also a conceptual music festival being held in three Australian locations in the new year. All Tomorrow's Parties are in fact a UK promotion crew who have melded with the classic albums concept known as Don't Look Back and created a festival version of it. 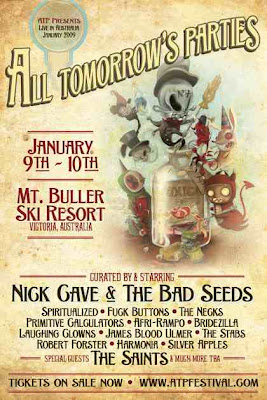 Don't Look Back asks artists to perform a work from their catalogue that has proven itself timeless years after it's inception whilst the festival version effectively asks a great performer or band to curate the line-up for a festival that they will headline. What a cool concept. ATP Have already trialled the idea in the UK, have a festival planned for New York next summer and have wisely chosen Nick Cave & The Bad Seeds to headline and curate the initial Aussie dates this summer. It's Nick's choices of band and acts to play with The Bad Seeds that make this idea so clever.

First and foremost The Saints, possibly the most seminal of all Australian bands, and they are reforming for this festival for the first time since 1977 - Nick, a contemporary of sorts, would have been instrumental in that decision. Other names include Spiritualized and The Laughing Clowns both of whom will fit the bill perfectly, former Go Between Robert Forster and then a collection of fantastic and extremely diverse acts from around the globe - all of whom will compliment the performance of the Bad Seeds - and there are more acts to be announced. At last a festival with musical cohesion bordering on a theme.

To add to the festival's lustre are the venues - the biggy is held on Mt Buller, a ski resort in Northern Victoria where the entire resort and the town below will be available for accomodation etc. Cockatoo Island in Sydney Harbour, an old penitentiary, will be the Sydney offering and Brisbane will be split between the Powerhouse and a Riverside performance.

Almost worth going to Australia for the whole of January then!

http://www.atpfestival.com/
Posted by Front Grill at 10:38 AM