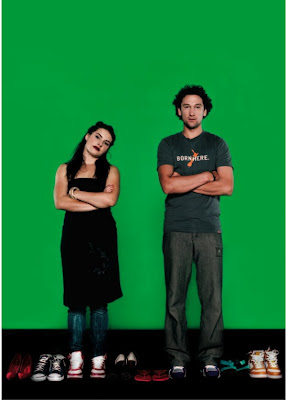 Leading Auckland theatre company, Silo, are about to revisit the play that catipulted the company into the limelight. Bare, the seminal Toa Fraser production which launched the careers of Fraser, Madeline Sami and Ian Hughes in 1998 is getting a rework from master director Oliver Driver. The play which features two actors, but fifteen charcters, will showcase the talents of two talented newcomers from another quality Silo creation The Ensemble Project. Morgana O'Reilly (NZ Listener and Metro Magazine Emerging Actress 2007 and familiar to many from recent aprearances in The Jackie Brown Diaries) and the equally-likely-to-win-awards Curtis Vowell will bring a certain 'freshness' to this iconic piece of NZ theatre. The play is described as Auckland's answer to Woody Allen's Manhattan and features a broad range of interesting AK types - from buff gymsters, Fijian patriachs and wanton street kids to chain-smoking divorcees. In the re-staging of the play Driver has opted for the construct of the theatre pantheon (or perhaps just the green room) as a metaphor for life - the stage littered with theatre detritus from water cooler to office notice board. Delivered in a tag-team style of collected story-telling, the actors transport us to lunch rooms, kitchens and candy bars around the city in a radical rework of the original production, which the company says "will enable those who have seen the original work to reconsider it". The production will also tour to Hamilton, Wellington and Nelson after Auckland.