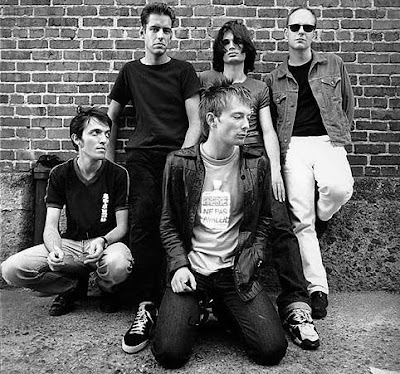 Karen Souza's recent paean, a cover to end all covers, has only really been eclipsed by The Cure's panegyric cover of this truly great song, which let's be honest, was pretty much another cover to end all covers. So why so much musical greatness? The original is quite simply truly great to start with. Guitars, angst, bass, vocals, angst, drums, pop. Song. Interestingly Thom Yorke, the original Creep, may have been in a band called Headless Chickens at the time the song transmorgified into musical shape. Here's what Wikipedia says about the possibility:


Jump to: navigation, search
For the New Zealand band of the same name, see Headless Chickens.

The Headless Chickens were a five-piece melodic punk band from Exeter, England, comprising at various times Thom Yorke (guitar and vocals), Simon "sHack" Shackleton (bass and vocals), John Matthias (violin), Laura Forrest-Hay (violin), Martin Brooks (drums), Andy Hills (bass) and Lindsey Moore (drums), they were well known on the Exeter punk scene in 1989. In June 1989 they released their first single, "I Don't Want To Go To Woodstock", on the Hometown Atrocities EP, along with tracks from three other bands. This is believed to be Thom Yorke's first ever released recording, on which plays lead guitar and sings backing vocals.

The Headless Chickens performed to packed out houses in and around Exeter during this period, including highly acclaimed solo shows and supporting acts such as Eat and De La Soul.

While he was in Headless Chickens, Thom Yorke's earlier band, "On A Friday", was mostly in a state of suspended animation; after he left Exeter, On A Friday restarted, eventually becoming Radiohead. Headless Chickens mutated into the techno-influenced Flickernoise (led by "sHack") who later changed their name to Lunatic Calm in 1996.