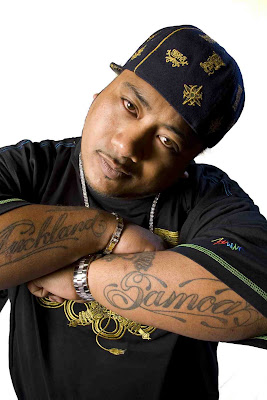 You gotta hand to Savage and the entire Dawn Raid crew - big time. It seemed only yesterday that a press release announcing 'the inevitable closure' of Dawn Raid records crossed our digital desk. Given the importance of the label in establishing not only Polynesian music but a large chunk of self esteem in South Auckland, it was sad news. But as we know too well, good things don't die and fast-forward to today's email from their parent record company Universal and the warm glow of admiration envelopes us. You may or may not know that Savage has blown up big time stateside with his hit Swing and Dawn Raid are rising with him. Check the facts: 1.1 million sales (so far) made up of more than 800,000 in digital singles and well over 300,000 in mobile singles. Sales of Swing have now surpassed US-released singles by Crowded House and OMC, and as sales of the track increase week to week it’s shaping as the highest selling single by a New Zealand artist in the United States ever. This week alone has seen a 20% increase in sales from last week. Swing is currently enjoying its highest position on the Billboard Pop chart at #35. Congratulations to all concerned! Here's the vid.