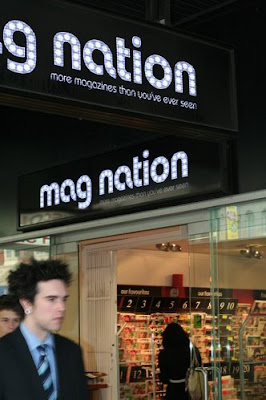 It was heart-warming to see Auckland's oldest dedicated specialist magazine store space - Magazinno on Ponsonby Road - resurrected a few weeks back by the clever folk at Mag Nation. Founders Ravi, Suchi and Sahil have built a great Australasian retail success story with flagship stores in Auckland's Queen Street and Elizabeth Street, Melbourne and six stores in NZ and Australia in total. Recognising that hardcore magazine fans had been coming to the Ponsonby store for years in search of titles that matter, titles of class and quality, the team descended on the failing, iconic mag store on October 10, re-doing the signage and re-stocking the old lady on the fly. One month later and the store is already up and humming with high quality magazines, periodicals and books from around the world - most of which you won't find elsewhere in Australasia. We can't speak highly enough of the store, brand and business. Oh, and of course they stock Black... Check Mag Nation online here.