ACK! We Hear The Artist Sing... 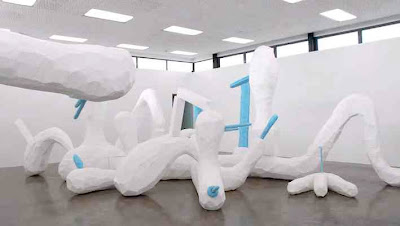 Black Magazine congratulates ARTSPACE who, in turn, congratulates Peter Robinson - the recipient of the 2008 Walters Prize which is quite simply New Zealand's most prestigious art award - and it isn't the first time that the prize has been granted to exhibitions that originated as part of ARTSPACE’s exhibition programme. Peter Robinson’s winning work ACK was initially shown at ARTSPACE. The 2006 Walters prize went to Frances Upritchard for Doomed, Doomed, All Doomed, her 2005 exhibition at ARTSPACE. For the 2008 Walters Prize, renowned international curator Catherine David selected Peter Robinson’s work:
“ACK is multi-layered, engaging and universal. It is clearly the work of an artist at the peak of
his career,” says Catherine David. Peter Robinson will receive $50,000 plus an all expenses paid trip to New York to exhibit his work at Saatchi & Saatchi's world headquarters. While we are passing out congrats, then let's big up the following finalists: Edith Amituanai, Lisa Reihana, and the inimitable John Reynolds. Their work will be exhibited at the Auckland Art Gallery until 23 November, 2008.
Posted by Front Grill at 7:59 PM