The Graceful....Hurricane. Grace Jones returns with her voice, her weapon of choice. 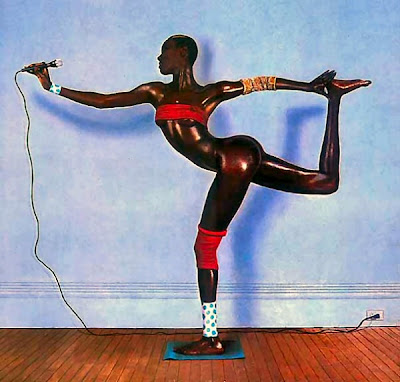 You are like a Hurricane Grace Jones. And you blew into our lives last week after 20 years as though you had never left - levelling every preconceived idea of what a stylish, I'm-so-eternally-hot-you-can-park-your-cadillac-on-my-bum 60 year-old music and fashion icon should do with a comeback album in the process. Hurricane is so perfectly...familiar, in a good way, that we find ourselves rolling it over and over...as if we had always been listening to it. The album is well produced with contributions from Brian Eno [legend], Sly & Robbie [legends], Tricky [legend] and could easily have been made in Massive Attack's kitchen [yep, they're legends too] circa 1989 - when they were shooting the video for Daydreaming and creating the seminal Blue Lines. Grace harmonising with Shara Nelson of course.

That's a lot of legends, and iconic status can sometimes breed derision amid the naysayers.

There have already been your usual, largely Pommie, sad-arse detractors suggesting on supposedly notable English sites that Hurricane is shite, humdrum, had-it. Here is Pete Paphides [who? yeah exactly...] from the Times Online “This is a plate/ This is a cup/ This is a story I didn’t make up,” she intones, deploying a rhyming style last popularised by the Shamen’s Mr C over what appears to be a digitised instrumental of the Um Bongo advert. Already we’re in the thick of a problem that afflicts much of what follows. Like other larger-than-life pop women – Cher and Shirley Bassey spring to mind – everyone agrees that having Grace Jones around is probably a good thing. But figuring out how best to channel her star quality in 2008 is another matter. Mr C? The Shamen, Cher...Yeah. Right. But then you get that with some of the no-name wannabees that tend to populate the flatulent hill country of the English Music Press landscape. It's a long way down the insipid fells of the next Big English Thing.

We think the people themselves have taste and will vote accordingly. Hurricane is set to become a valiant return to form for the ultimate diva of groove. A music, fashion and culture figurehead forever. Perhaps Grace herself best sums it up when, for just a few bars, she sings...

Amazing Grace, how sweet the sound....