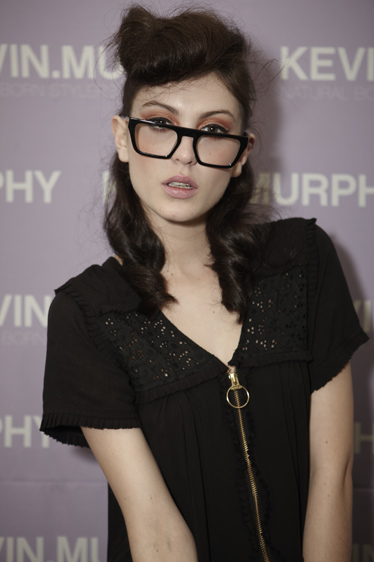 50's is good!
Kevin.Murphy style master James Furness was recently in Auckland to educate and spread the good word about the fab Australian hair brand. Grant Fell and Rachael Churchward sat down with him to discuss his path from opening United Notions salon in Ballarat at age 18 through to the K.M products like Powder.Puff and Motion.Lotion that are taking the hair world by storm. All photos from the Stephen Marr, Department Store event by Stephen Tilley. 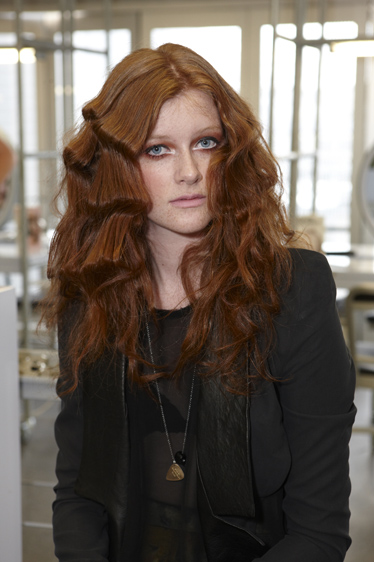 Put your hands in the hair and
wave it like you just don't care!
Grant Fell & Rachael Churchward: What does your role as Kevin.Murphy Style Master entail? James Furness: Basically, I look after all of the education and image of the brand through Australia, New Zealand and in the future, Japan and China. I also work very closely with Kevin on the development of all of the products and of the styling and the image of everything that we put out. GF: Where does Kevin Murphy retail, which countries? JF: Kevin.Murphy sells throughout the USA, in our first year we were the number one selling start up product in the history of American (hair industry products). A start up product is a product that doesn’t have any other legs, yeah? If you look at L’Oreal, they have all of these other legs, then they go in with a product, so it has ‘legs,’ whereas this was a brand new product and it’s just going great guns over there. Kevin.Murphy can also be found right through Europe, we still have about ten or twelve countries to cover but it is particularly massive in London at the moment and through Northern Europe. The next territory to capture is Japan and China. RC: I tend to like more targeted brands like Kevin.Murphy rather than mass market brands in general. Kevin.Murphy is very good at reaching its customer. JF: We’ve put a lot of work into the development of our products. Quite often we will sit down and have a discussion about who is the woman of our times. We’ll create that woman and from there go onto her needs; what does she love, what does she have, what does she taste, what does she want and we’ll start to develop the product for that. It ends up giving the product realism without having to say too much. We are also currently going through a change in our ethos, where, instead of trying to create magicians as hairdressers, we are trying to create real people…GF: You have a significant background as a session stylist? JF: Yeah, I have been hairdressing for twenty-four years and have had my own business for pretty much the entire time. I’ve looked after Australian Fashion Week for about seven years GF: Working with Schwarzkopf? JF: That was with Schwarzkopf, yes. I have been with Kevin now for five years and have done a lot of editorial work in Sydney but also in Europe, I lived in Europe for two years. 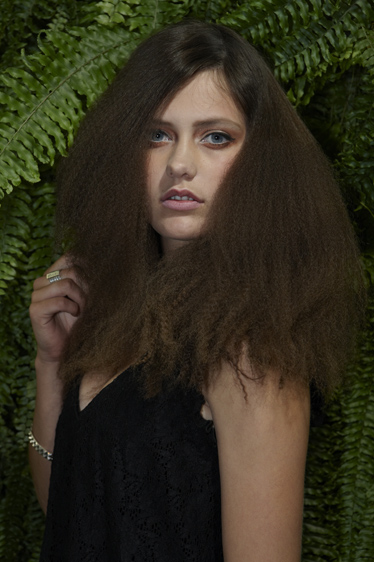 Crimped perfectly for the backdrop
GF: I like the name of your first salon, United Notions… JF: I was 18 when I opened that up, I actually made all of the furniture myself and did the whole thing, it was a great experience. RC: Was that in Melbourne? JF: No, that was actually in Ballarat of all places. I grew up in Ballarat and moved to Melbourne when I was fifteen to do my apprenticeship, lived in a caravan in the back of a church, and then returned to Ballarat and set this up. I sold United Notions, went to work in a salon, and then opened up another place called Geisha. With Geisha we wanted to create a business that would turn our industry on its ears. The industry then was really lacking direction, purpose and service…GF: Was it like a spa? JF: Yeah, it was a spa, 600 square metres in Little Collins St, above Scanlon Theodore. You’d basically come up, go into a change room, put on a gown, your clothes would go into a locker, and they’d get pressed. We’d sit down on mats and have a chat about what we were going to do and then go through and have the experience. Upstairs we had floating firewalls, stone gardens, six private rooms with shoji screens, floating beds with flowers all around them, massage rooms, it was a fantastic experience. GF: There wouldn’t have been many spas around back then? JF: There was nothing like it in the world basically, except Japan. We were lucky too as Memoirs of a Geisha came out and everyone went quite Japanese around that time, eating sushi and going crazy. We were very lucky as the whole Geisha experience of being taken by the hand and through an experience was something that we were really guided by. It was basically, come into our salon and we will take you through an experience that you have never had before. When that ended I went to the UK with my wife Daniella Faella who was quite a big model at the time. I worked in a salon in London called The Lounge that was the hip salon for the DJ set; John Digweed, Sasha and those guys would come in and get their hair done. When we returned to Melbourne we set up Moist which was a cool little place with glass roof, concrete wall-to-wall, really chilled with white floors, a really relaxed place. We had that for seven years, it was terrific. 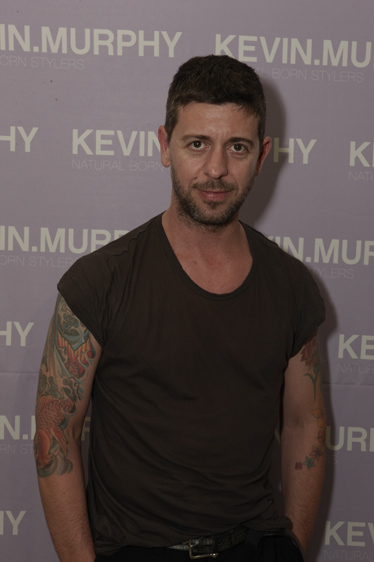 James Furness
GF: Are there any Kevin.Murphy salons? JF: No. We have the brand and we go around educating and representing it. We put everything that we can into the education and the image of the brand. All of the people that make the serious decisions about the direction of the brand are out on the streets doing the education and we are really proud of that, we will keep that going no matter how big we get. 30% of our entire turnover goes back into education, we are very keen to ensure our culture is spread out there and that people really follow onto it and inspire themselves. GF: What do you do in an educational sense when you go into a salon like, say Ryder? JF: With Ryder, basically, I just wanted to go into the salon and see where Greg (Murrell) works, get a real feel for who Greg is and what his business is like. I met him on Monday night, so we had a bit of an ‘inspire me’ night, a bit of a dirty night and got everybody excited. I was really intrigued by Ryder and wanted to see where Greg was at. It was really good to see that and hopefully we can keep in touch from that night, I’m very intrigued by Greg himself and will hopefully spend some more time with him, his direction is really what Kevin.Murphy is all about and where we are going. The salon I have now is on a rooftop of a building, only three guys there, it’s extremely boutique…RC: What’s that salon called? JF: It’s called 579. We don’t advertise, we don’t have a sign on the door. It’s in Chapel St, South Yarra. GF: That is boutique in the extreme! Tell us about the latest Kevin.Murphy product, Powder.Puff, there is a lot of excitement about this product. JF: Powder.Puff is probably the grittiest, biggest product we have. It is the first of the powders that have hit the market that is water soluble, so it will rinse out with water. Everyone else in the market has to be washed out. It is pretty much engineered to give that extra lift off the roots. 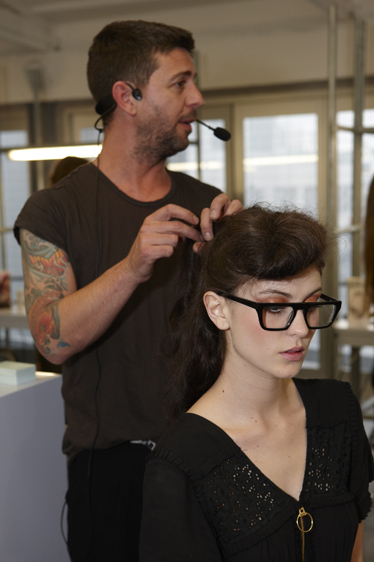 RC: How do you apply it? JF: You don’t need a lot; just a few sprinkles in your hand then knock it into your roots. A tiny bit here, a tiny bit there, then you rub it in to the roots and it activates, it morphs…GF: Does it give body? JF: Yes, it does and can very quickly go three times as big and the great thing about it is that it has memory, all Kevin.Murphy styling products have memories in them from the session spray, through to Anti.Gravity to this so you can brush your hair after it is in there and it will go back to where you were before…which is terrific. GF: Technically how does that work? JF: That’s a good question and I can’t tell you exactly, it’s a bit of a secret, the magic sprinkles! RC: I find in the morning, if I squeeze Motion.Lotion into my hair, just put a little bit in and spin it through the curl, it just drops back in this smooth way. JF: Yeah Motion.Lotion is a fantastic product…certainly one of my favourites. GF: Is there anything new coming out of the prolific Kevin.Murphy lab? JF: Yeah, quite a few. There’s a new mousse coming out which will be fantastic. We also have some new styling equipment coming out, some wavers, which are like big bricks that you click into the hair. You can do one, then another, then another. Then you put Heat.Defence on, which is our volumising setting spray. You dry it off, take the wavers out and you get really big, deep waves. We also have a new hairspray coming out that is very exciting. It is the biggest holding hairspray that I have ever worked with, but the product is invisible when you touch, so you can’t feel it – it makes your hair go bang and dirty, but you can’t feel it, which is great. It’s an amazing product. GF: Tell us about your role at the recent Melbourne Spring Carnival? JF: We decided that instead of encouraging our clients to wear hats and fascinators we would turn their hair into hats. We started crimping hair, twisting it, creating all of these shapes, sewing the hair up – all inspired by a 50’s energy to it. Then we also teased hair right out with brushes, put hair nets over it, really dried it hard then brushed it, to give us pliability and foundations to get shapes. We’re really big on crimping at the moment. GF: In a nutshell, how would you describe the Kevin.Murphy brand JF: I think Kevin.Murphy is probably, successfully and will become even more successfully, the brand of the moment, as far as fashion in hair goes. It definitely covers every single genre from six-year-olds right through to eighty-year-olds and it creates an effortless bond of stimulation for people…