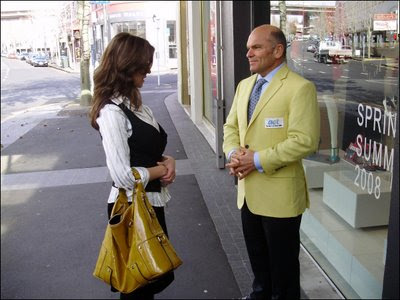 Super fit NZ Politician, Rodney Hyde, leader of the ACT Party, also has the yellow-in-public problem. It's doubtful the political hipster would have picked up a tip from Lagerfeld himself but his style is still bad, canary yellow bad like Michael Jackson. Despite Rodney's non-politically-motivated attempt [Yeah; Right] to gain attention it is Karl who  is less likely to be run over. Rodney on the other hand is more likely to be seen at the Pony Club.
Posted by Front Grill at 10:08 PM