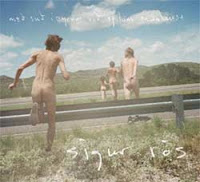 Sigur Rós' new album, Með suð í eyrum við spilum endalaust ("with a buzz in our ears we play endlessly" - they even make tinnitus sound beguiling!) is due to hit the shelves on 28 June, just in time for their appearance at Splendour In The Grass.

If you can't possibly wait that long, however, head to online radio site http://www.lastfm.com/, which will be streaming the album in full from 9 June.

The first album they have recorded outside of Iceland (in New York, London, Reykjavik and Havana, no less), Með suð í eyrum við spilum endalaust is also the first to feature Jon "Jonsi" Thor Birgisson's vocals in English on one track.

For more info and to (legally and freely) download the first single, 'Gobbledigook', visit http://sigur-ros.co.uk/
Posted by Patsy Galore at 5:49 PM