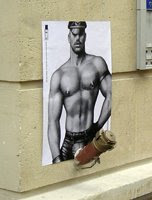 The name of a perfume is often as evocative as its smell - J.Lo invites you to Glow with top notes of mandarin and white cherry, whilst Coco by Chanel allows you to ape a small part of the great woman's style and name, along with a distinct whiff of Tunisian orange blossom. Some of us proudly adopt them as our signature scents, but the next time you are asked “what are you wearing?” would you want to reply: “ah, that'll be my Putain des Palaces AKA Hotel Slut. Thanks for asking…”?
The charming Etienne de Swardt thinks you just may, and he's provided just the range to furnish your desires through his infamous Etat Libre d'Orange, a fragrance company that for once elevates creativity over marketability. This man has single-handedly created the kind of provocative fragrance blends that can be used for pre, during and post-coitus gymnastics, and is fiercely proud of it as only a lusty Parisian can be. Originally from the South African state of Free Orange (hence his company's moniker) and now a resident of the French capital, he calls himself a “seducer first and creator second”, and his perfumes are definitely not for the faint of heart. I interviewed him recently and found him to be as awesome as his fragrances suggest, and was ecstatic to come across the marketing campain for his new men's fragrance, Tom of Finland, whilst trawling the net. Using a truly inspired guerilla marketing technique, the company has been posting images along the same line as gay art legend Tom of Finland's infamous works - awesome illustrations of leather daddy-type men—in public spaces, attaching the images at the crotch to protruding fixtures. Love it!
Posted by Helene at 4:36 PM