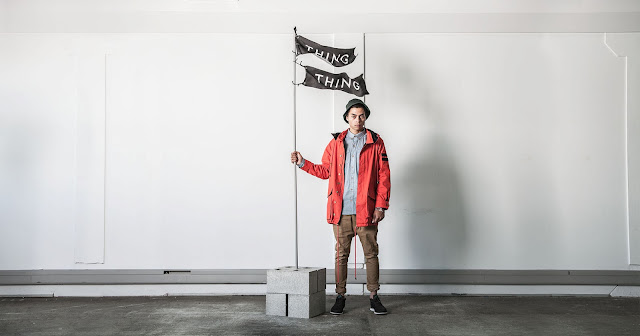 Dan Buckley is not scared of death, in fact he believes in R.I.P - ing it, “Do everything you need to do so you can rest in peace.” With partner Drew Gregory he’s taking the brick-by-the-horns with new label Thing Thing. Grant Fell learns about stitching Things together on the sewing machine - so the threads can hang out. All clothing by Thing Thing. Photos: Above and throughout: Drew Gregory. Hair & make-up: Mary Dawson Models: James at 62 Models and Dasha at Vanity Fair. Photo below: Damien Nikora

Grant Fell: Hi Dan. Can you tell us a little more about your partner in Thing Thing, Drew Gregory? Dan Buckley: Drew is a hilarious Canadian character who I had met briefly during the course of the last few years - he has been designing clothing and sneakers, and has been involved in the rag/fashion/street game for quite some time, almost as long as me. I have been an admirer of his work from afar since at least 2005 or so. He has got the cutest kids, and a radical lil’ wifey – and his wifey + 2 kid unit is a big part of his programme, that and the second major part of his life – which is DESIGN AND MAKE. He lives for this, he is an attention-to-detail focused, extremely well-rounded designer who can catch a great photo, flop out a next-level silhouette, put a great fabric story together, graphically design a next-level catalogue, and put a whole mens or womens range together – he can put it together mechanically, and more importantly – he has a huge flair for outputting everything ORIGINAL. He is highly original with his design style and output and this is where we bond the hardest, we both strive to do something unique in this rag game. 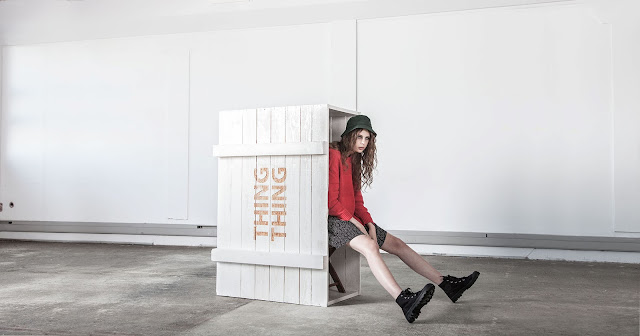 What is his background and how did the two of you meet? Drew has been building clothing for almost as long as me, and we met at some stage while he was working on Poynter footwear, and while he was doing some work for the brand, Federation. Somewhere around 2007, I think I was introduced to Drew via a mutual buddy – Harley Anderson. Harley and Drew met way way back in the early Noughties while they both worked on the West Beach outerwear brand. So Drew is a trained art director/designer who has worked across a stack of brands. What about the name Thing Thing. Is there a clear cut meaning behind it or is it more of a random concept? THING/THING is the simplest of brand stamps. It’s a nothing name, it’s a see-through concept built on a raw principal of being honest, and being about the service and the product. It’s half feminine (THING) and half masculine (THING). That’s pretty much it. What role do each of you play when you work together? Drew makes stuff, I sell it - that’s pretty much it – quite a lot of cross-over, we chat for days about how we put it all together – lots to do around production management, fabric choice, range building, product design, new maker investigation and inclusion, idea inception, new customer inclusion, Friday beers, and philosophical discussions about life as we know it and how to stitch those ideas into becoming pieces of clothing. 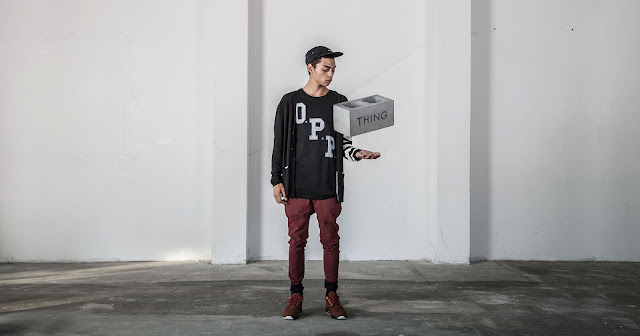 How many ranges of Thing Thing do you do per year? Four. We run it naturally – with the seasons: Autumn/Winter/Spring/Summer, and then as well as this we run little ‘QUICK POP’S’ - piecing together little re-cuts and new inclusions of little in-the-moment bangers. I like the way you say you are both absorbing what’s going on. That you are excited by what is happening today in modern culture, technology, art, business and on the street – are you influenced by other designers and movements in fashion, or is it more general pop culture? Shit yes – I love everything that’s going on in the art/music world. I love peeping what’s new, whats happening – particularly with music, feeling it morph – I am way hyped on shit like 3 Loco, Major Lazor, Dirt Nasty, Die Antwoord, the XX, Lorde and a huge mix of all sorts of others – there is so much happening. I am hugely influenced by skateboarding, and that rubs off pretty hard on our work with THING/THING. I really like stitching little things together on the sewing machine, letting the threads hang out. Drew and I work together pretty well because he is from the same school, he is a Snow Bro a little more than me – growing up in Canada. He grew up playing ice hockey, too – so we catch a bit of vibe from sportswear…that has a pretty big influence on our product design. So in answer to the question – we are probably more influenced by modern pop culture than anything, but we definitely pay attention to whats going on in the fashion, street and sportswear game. 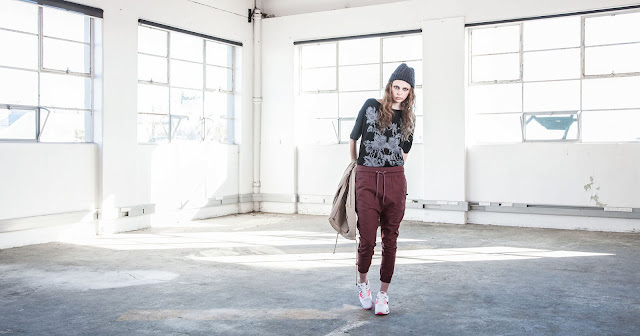 Describe the Thing Thing man. He’s a fucking retard, ha ha – he’s diverse. He has no style. He flows through every style. He flows with it. Comfortable anywhere. With the brand I like playing with this dumb idea - ‘A ripping THING’. Like R.I.P. Like dead one day. I like thinking about dying, I like living with that idea in my head – and I like to inspire thinking about death. I like scary shit, getting scared – seeing if you can handle it. Getting a punch in the face, or getting eaten by a shark. I remember some dumb quote from Jim Morrison “the closer you are to death, the more alive you feel.” I think it was Jim, I could be wrong but I like that idea. Life is short. I don’t want to die, but I like the idea of being a ripping thing, a thing that is going to R.I.P. - like - everybody knows R.I.P. but what does it really mean and stand for? Rest In Peace. Do everything you need to so you can rest in peace. 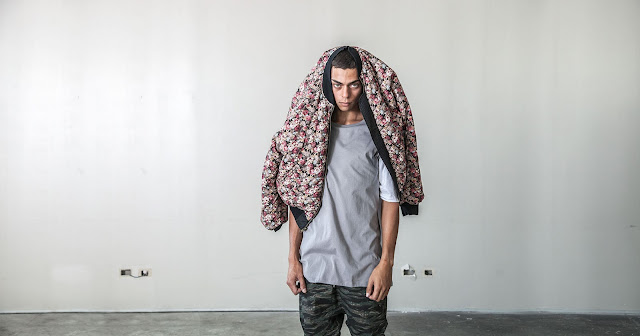 Describe the Thing Thing woman. A beautiful thing. Stupid beauty. Not dumb, but stupefying. Women are basically the meaning of life. They give life. I play with this idea. ‘A beautiful thing.’ We want to develop that out – as we develop this THING. That’s awesome Dan. I love the fact that the biggest issues in life, and death, have a relevance to you and your brand. You said that feedback was important to you as you develop Thing/Thing. How do you go about getting feedback from your customers? I ring ‘em up and chew their ears off, and visit with them and talk too much. I send real long-winded emails – that get me three word answers. In visiting with my customers, we design things on the spot. We have only been trading as THING/ THING for five months, and we already have had some hot design inclusion from some customers just going, “Oh you should do that with flowers, or “Oh you should do that a lil slimmer” - or, “What if you did that here, with that pocket over there?” Or, “Hey, shut the fuck up!” Are you selling or shipping overseas yet? Online? Plans for international distribution? We are running our first delivery to a mini chain called Culture Kings in Australia in May. These guys have booked a pretty solid order – excited about that. Visiting Aussie later this month to work it. 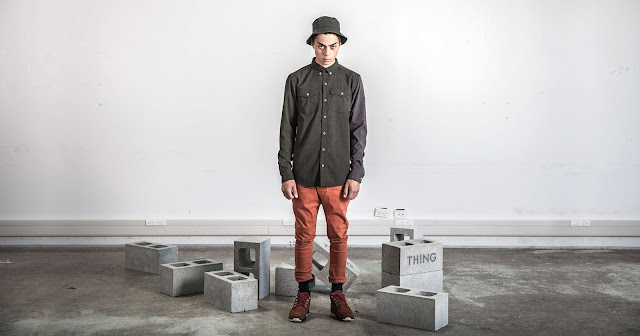 When we talked you said that both Drew and yourself are primed for this Thing and have a defined idea of where to take it. Where is that? We intend to have an online store, a flagship store and an outlet store in each of our markets, and have the biggest chunk of our trade being run in each market through a unique mix of multi-brand street style retailers: New Zealand, Australia, USA, Europe, Asia Pacific. That’s the running order for how we intend to grow. We are pretty enabled to do this via our connection with Shriro, a Hong Kong based firm who is helping us grow this Thing, and is already very international and established as far as size, distribution and network goes – so we have the best chance possible to make this Thing become an amazeballs art project as well as becoming an integrity based and strong piece of business.
Posted by Front Grill at 1:39 PM