We have just returned from spending a few days shooting in Melbourne with our Aussie crews: Australian Editors Thom Kerr and Justin Henry and the fab boys at Superteam Studios. It was an inspirational trip, working with inspirational people. On Saturday we headed west toward Ballarat to shoot at an amazing house built at the very beginning of last Century, many thanks to the location crew of Anne and Kathy at Grzansquared. Ribal and Gil, otherwise known as Superteam, showed us exactly why they are a team, shooting simultaneously, both cameras blazing, to capture gorgeous new model Madison at Pride/Giant/IMG. They also shot a lovely, languid film and we will post that once the issue is out. Black Fashion Director Rachael Churchward styled with brilliant assistance from Sophie Barker and the inimitable Justin Henry supplied suitably fantastic hair and make-up. Jamie Wdziekonski  of Oh Jamie fame came for the day and took these beautiful black and white BTS images. This was Madison's first official editorial shoot for a magazine like Black and everyone on set was blown away with her maturity, sensuality and awareness of exactly where the camera was and what she had to do. Rachael Churchward's brief to all was based upon three books; Emily Bronte's Wuthering Heights, Australian writer Patrick White's 1957 novel The Tree of Man and Charles Portis' 1961 classic True Grit - all feature a young woman, romance, far flung locations and unrequited love. The entire crew, and particularly Madison, interpreted this perfectly. Special thanks to Dexter for the bounce and photo assisting! On Sunday, Thom, Justin and Rachael shot the very elegant and beautiful Annabelle Moore at Chadwicks in a 60's inspired beauty shoot at Superteam Studios informed by a classic Hitchcock film with moments of Twiggy, Audrey Hepburn and Jean Shrimpton. Thanks Melboing, we had a ball. All photos by Oh Jamie. 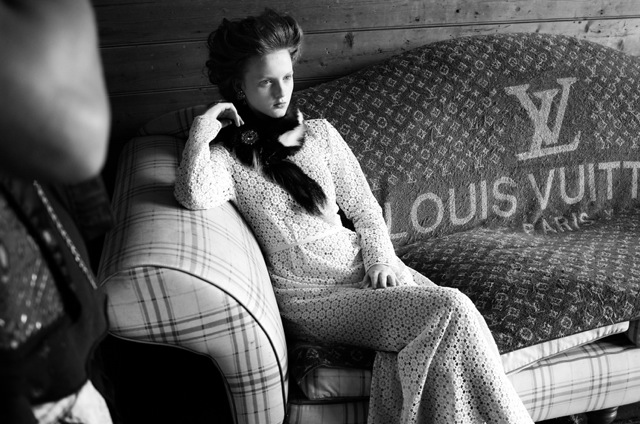