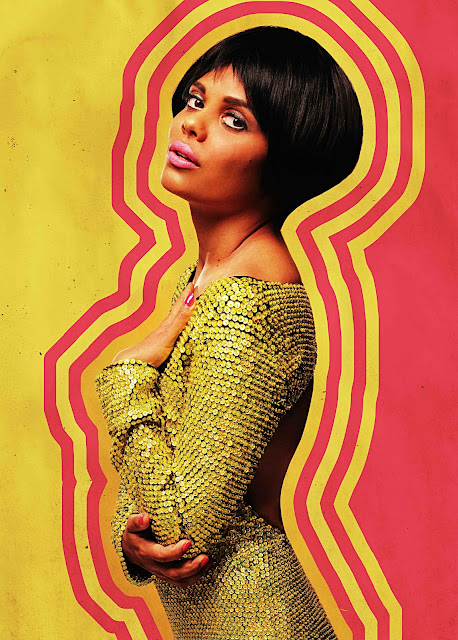 
Miranda Tapsell caught the attention of the general public in her recent portrayal of the character Cynthia McCrae in the hit Australian film The Sapphires. For those of you who are yet to see the picture, it chronicles the true story of four aboriginal women who were discovered by a talent scout (played by the ever charming Chris O’Dowd). They formed a girl group named The Sapphires and toured Vietnam in the late 60s to perform for the soliders during the war. The film is an adaptation of the hit stage show of the same name. It touches on issues of the stolen generation alongside the struggle for Aboriginal equality, whilst combining a love story with a wonderful soul soundtrack and a series of stellar performances. Miranda’s character Cynthia is the comic relief in the film. A flirtatious know-it-all who dreams of a more exciting life in her quest to discover true love.

Miranda Tapsell was born in Darwin, but spent her childhood growing up in Kakadu, a beautiful area of national park spanning just under 18,000km squared. To give you an idea it’s roughly half the size of Switzerland. It contains four major river systems, six major landforms and a remarkable variety of Australian wildlife. It is considered a national treasure and the most beautiful part of Northern Australia. Miranda deeply values her experience of growing up in the area. “It made me really appreciate how to enjoy yourself simply without needing many things to bring you happiness. You find the joy in other things, like being in nature, swimming and camping. I’m really glad that I got to appreciate that kind of lifestyle.”  As a 13 year old girl, her school was visited by Aaron Pederson, another indigenous actor who was known not only for his talent but his good looks. This was Miranda’s first tangible introduction to acting. “He was doing a play at the time so he decided to hold some drama games for the local school. I was so star-struck I got up and showed off in front of everyone. All the kids were asking me, “Why are you being all weird?”. I replied “This is Aaron Pederson, as if you wouldn’t want to show off in front of him!” It kind of dawned on me that this was his job, what he did for a living, and I thought, man that’s an awesome life!” Miranda left Kakadu to complete her final years of high school in Darwin. By this time she had registered her interest in drama and was excited to pursue it. Her love of performance came from a sense of escapism into her characters. “It was amazing to think I could be something outside of my physical attributes. I can be anything because of acting.” Straight after high school Miranda auditioned for NIDA, Australia’s most prestigious acting school. She was knocked back. It was during this year that Miranda first saw the stage show of The Sapphires with her future co-star Deborah Mailman - she was just 17. “After that show I wanted nothing more than to be a Sapphire.” Neither of them knowing how fate would play out. On her second NIDA audition she was accepted. An accomplishment in itself knowing NIDA’s hesitation in taking on students so young. “I don’t think I would have been able to navigate through the industry and get to where I am without the support of NIDA. I can go into plays, I can go into films, I can do voice overs. It was a whole set of skills that I developed.” The school continued to expand her understanding of what was possible and as a fresh NIDA graduate Miranda hit the theatre scene for the next few years. Soon word got out that the stage show was being turned into a film. “There was an open casting call to play the roles of the Sapphires. It was wonderful that everyone had equal opportunity, but also intimidating because there were thousands of talented actors out there. When the chance to audition came along I thought to myself, I don’t care if this is the last thing I ever do. I have to do this film!” Each time Miranda received a call back, she became more determined to do her best. After a long audition process the day finally arrived. “I was at home, I can’t even remember what I was doing, it was that massive. When I got told by my agent I said to her, “You better not be lying to me!” To which she responded, “It’s real.” Miranda then proceeded to scream down the phone when reality hit that she landed the part. “I think I turned my agent deaf. I was crying because it was all I had wanted since I was 13-years-old.” It was a full circle moment for Miranda, who still remembered the feeling of seeing the play for the first time. “Some people might question fate but I just think, how could I see this show and then years later when the opportunity to be in the film comes along, I get a part in it? I find something really special about that.” Miranda was nervous at the first screening of the film. “I knew we’d done something really special.” The film debuted at Cannes receiving a ten minute standing ovation, capturing the attention of Hollywood royalty such as Harvey Weinstein. “These people who are untouchable... they were right in front of me!” An extraordinary journey for a girl from Kakadu. “Where it’s taken us, and the fact that it’s touched people around the world is so overwhelming, but so exciting. It means bigger things for Australian film.” Miranda feels a deep sense of satisfaction at the idea of other young aboriginal actresses feeling inspired by the film and expanding their own notions of what is possible. The film has been her contribution towards the retelling of Aboriginal lives to a mainstream audience. “It’s so important to have our stories told from our own perspective and celebrated. No one should ever feel that there is a barrier between anyone. At the end of the day we are all human.”  Miranda is currently in rehearsals for the Sydney Theatre Company production of The Secret River, a story of two families divided by culture and land. The play will launch in mid January 2013. Book tickets here...
Posted by Front Grill at 3:12 PM