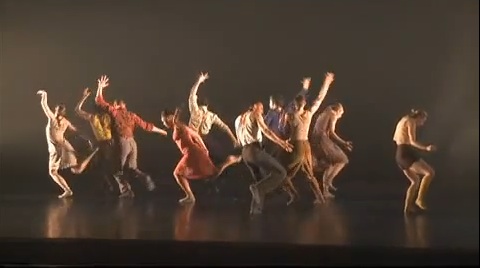 Last night I saw something that may have possibly changed my life. The dance and music performance Political Mother put together by Berlin choreographer Hofesh Shechter. Having just won numerous awards for this work overseas, The International Arts Festival currently taking place in Wellington was on the money with bringing this one over.


As a dancer myself I was so impressed with the confidence Hofesh had in them and the maturity they had in themselves to deliver such an enormous message and to do so with conviction, release and intelligence. Using their able bodies to dance movement like they did; a new language of movement spoken in themes of each other, all of which came from a place within each dancer that was concept heavy, rather than 'here i am performing this move'. Torn up pieces of folk dance, Indian festival-like chanting, almost dream-like motions, low eye lines and some powerful angst all drove each dancer to convey or speak this message from an honest and deeply considered place. I came away with a feeling that they were representing us all and exploring themes on change, and the resistance to.

As well as exploring something internal for each dancer, the focus shifted to the live music being played behind them on the stage. A full blown rock band of electric guitars, military inspired drum lines, a soft melodic woman's voice which at times was overrun by a deep, hard-metal german screaming from the main male vocalist. The band almost played a role of dictatorship, exploring the idea of an Hitler-esque figure and war induced propaganda, and with their music they drove the dancers into form and into mess. I found the choices of overlapping and cutting out from and to music, and the dynamic against the dancers was a brand new idea I'm not sure I've ever seen before. It was challenging to watch but amplified their need to inject the idea that nothing is even, nothing is perfect, continuous or neat.

A one point a dancer came on stage with what seemed like a baby wrapped in cloth but then pulled out what was meant to look like gun powder and with his finger shot it across the stage in sync to some high-pitched musical notes. The powder circled the stage leaving the epic side lighting states to form a backdrop similar looking to film grain. The dancers footprints continuously smudged and flicked through the powder on the stage floor, with their shuffle runs across stage, an almost hunched back stance, a softness in their feet with folk dance repetition, lunges into and out of the floor, running in a circle creating a whirlwind effect and a group of duets that portrayed the real intimacy of sex.

The show finished up with a light box spelling out the words 'Where there is pressure, there is folkdance'. This continued with a dimly lit reversal of the entire show performed backwards by the dancers, set to some howling blues track sung by a whopping female voice. And that was it. Suggestive but not preaching anything in particular. Just ideas thrown around and left in the audiences lap to take or reject which ever they can handle. Hats off to Hofesh Shechter.

Watch some of the work below and if you can see this live, do so.