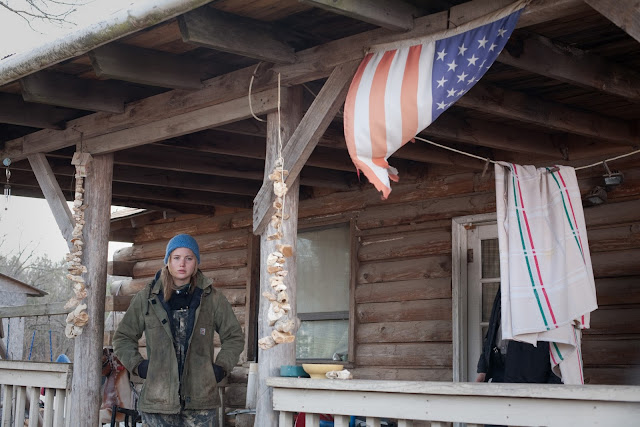 Ree looking casually chic out front of her Ozark mansion
Around New Zealand, and around the world, in pockets hidden away from prying eyes, small backblock communities are living in the shadow of Hell. Methamphetamine use, and more exactly its production, has ravaged them beyond recognition, creating paranoia, fear, confusion and poverty. Isolation is the substructure of these tight-lipped communities where asking questions is asking for trouble. Whether nestled into the foothills behind Otorohanga, New Zealand or hidden in the forest down a winding, wintery road in the Ozark Mountains, Missouri, meth takes no prisoners and makes its own rules. The Ozark Mountains is indeed the setting for Debra Granik’s acclaimed feature Winter’s Bone. The film has all of the hallmarks of an Oscar winner and has already garnered Best Feature, Breakthrough Actor (Jennifer Lawrence) and Best Ensemble Performance nominations at the Gotham Independent Film Awards, considered by many as the harbinger of things to come over the awards season. Granik and director of photography Michael McDonough succinctly capture the essence of Daniel Woodrell’s book, underlining in candlelit perspective the writer’s classification as an exponent of ‘country noir’ and filling the screen with tension. Yet, it is the casting and performances, in particular by teenage actress Jennifer Lawrence which brings the film alive, as paradoxical as that statement may be.

Lawrence plays 17-year-old Ree Jolly, a girl with two younger siblings who is caregiver for her family, including a barely-there meth-addicted mother. Her father, an infamous local meth cook, has gone awol after putting the family house on the line to secure his own bail. The local sheriff, played by Garret Dillahunt, (only marginally less menacing than the rest of the film’s broken characters) gives her an ultimatum to find the missing father before his court date, or lose the house. Showing steely resolve, Ree heads out, or more accurately into the community, in search of her phantom father. The film follows her travails through the stark landscape, via blown-up labs, toothless hillbilly-filled houses and car wreck-strewn backyards - and builds around her deepening strength of character. Her search starts at her uncle Teardrop’s place. Teardrop, played brilliantly by John Hawkes will send shudders down the spine of anyone who has come too close to meth abuse for comfort, yet, as the film progresses we see through his gnarled exterior and glassy eyes to a warmth within – even here in mountain Hell there is hope! Of equal meth-induced scariness is Merab, hagged wife of the local head honcho played by Dale Dickey, although she too softens to the plight of the sweeter-than-light-but-harder-than-nails Ree.

The script is superbly drenched in nightmare deep-in-the-woods realism: “I said shut up already with my mouth!” Teardrop explodes. “He had to leave Ree with the kids, it’s the way things go” drawls Merab. “He cooks crank. They all do now” says a resigned Sweet Pea. But the dire bleakness of the location and tale itself is tempered with some uplifting moments of subtle humour and humanity; little girls doing what little girls do and riding a toy horse around a trampoline, local meth head youths nonchalantly listening to unlistenable death metal music and most notably the local ‘band’ Marideth Sisco and Blackberry Winter letting loose with some sublime country pickin’ and singing. Sisco looks like an average nana better suited to baking cookies than singing but has a one-in-a-million voice that is utterly compelling and on tunes like Ballad Of Jessup Dolly could upend the hairs on anyone’s neck. I’m a certain starter for the soundtrack as well.

This is a film so close you can touch it, and a performance from Lawrence that is so real you quite simply believe it. Whether skinning squirrels, teaching her decade old siblings how to shoot, taking a beating or thrusting her hands into a moonlit swamp in search of her father dead or alive, Lawrence is outstanding and Winter’s Bone is rightly poised to become the film of the year. Congratulations to Curious Films for securing the Australasian rights to distribute the film. If Winter’s Bone is an indication of the quality of film coming through Curious, we look forward to many more Curious-distributed films making their way onto the big screen locally.

Winter's Bone is now showing in selected cinemas in New Zealand and Australia
Posted by Front Grill at 10:59 AM