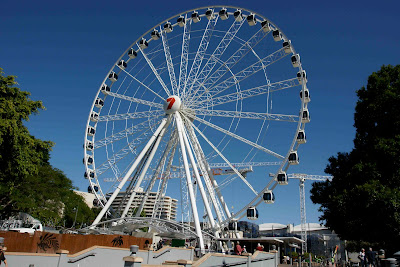 Oh, how Brisbane has changed. Whilst we have never officially lived there, we have spent large tracts of time in the sunshine city since the 1980s and have always enjoyed it's charms; its weather, beaches, architecture, sunshine, people, buildings, rivers, parks and places. In recent years though, the city has undergone a transformation that has, as Aucklanders, left us wishing and hoping that someone, somewhere - we're looking at you new Super City team, whoever you are - will finally do something about the municipal madness that has ground Auckland's potential as a fine harbour city, into the ground. Brisbane, take a bow, the South Bank area alone, home to the sprawling Brisbane Convention Centre, Griffith University, the fabulous GoMA and numerous other arts, culture and interesting people-friendly institutions offers much to visitors and locals alike.

We were in Brisbane this past weekend courtesy of Tourism Queensland to attend the opening of the wonderful Valentino Retrospective; Past/Present/Future at the Gallery of Modern Art, Queensland. The fact that Brisbane is the only city in the world outside Paris (Les Arts Decoratif) to ever host this stunning, substantial exhibition speaks volumes for the city, its infrastructure and the forward-thinking state government who are boldly pushing Brisbane as Australia's "New World City." The quality and breadth of the exhibition itself : 95 gowns from the "Last Emperor of Couture" from the late 1950's through to his retirement in 2008 and a further five equally outstanding creations from Maria GraziaChiuri and Pier Paolo Piccioli, the creative directors of the house since Valentino's departure, is enhanced by concurrent events in the area, notably the Brisbane Fashion Festival and a fashion and film festival held at the Australian Cinematheque that explores fashion and its relationship to cinema.
Further posts on the exhibition itself will follow but we had such a great time in the city with our NZ media delegation: Justine Smith (Tourism Queensland), Alice Neville (The Listener), Zoe Walker (NZ Herald), Carolyn Enting and Casey Taylor (Dominion Post) and Lucas De Jong/Charlie Vlassof (TVNZ) that we felt compelled to mention a few highlights: 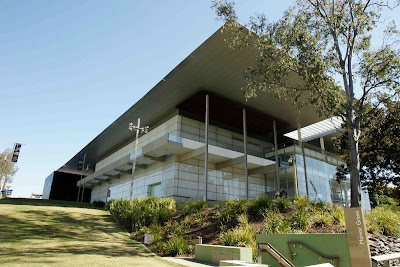 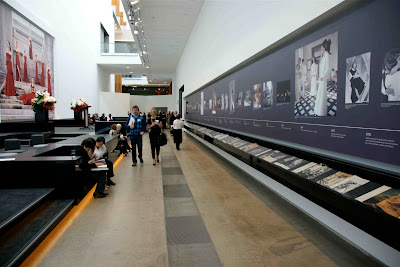 1. GoMA
If there is one thing that struck us about GoMA, aside from the perfectly blended Scott
Redford (Black arts section, issue 3) statue outside (below), it is the sheer size and height of
the gallery and space for the artworks. Two halls house the Valentino retrospective and a more public space (above) screens videos and the Valentino journey in print. Set on the banks of the river, GoMA is beautiful gallery. 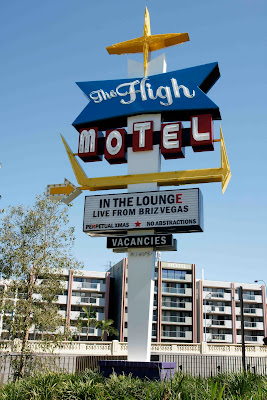 2. The weather
During the Brisbane spring of August through November, which is coincidentally the length of the Valentino exhibition, Brisbane has some of the finest weather in the world. Repetitive days of still, clear 20 - 25 degree pristine sunshine are the norm and the wind doesn't make much of an appearance. This obviously makes walking, outdoor dining or catching a City Cat down the Brisbane river that much more enjoyable but it also means pretty much everyone is in a good mood, ideal in a tourist sense. We stayed at Rydges South Bank where the rooms and service was good and hundreds of cafes, restaurants and the aforementioned cultural institutions were an easy five minute walk in all directions.
3. Dell Ugo Ristorante Italiano
On Saturday night prior to attending the Group Show at the Fashion Festival, Justine took us to Del Ugo on Grey Street in South Bank. The service was exemplary and the food devine. Highlights were the Aussie Wagyu steak which was bounteous and mouth-wateringly juicy, and the Sea Perch rolled in fine carrot. Dinner was rounded out with a round of Grappa and much eye squinting. 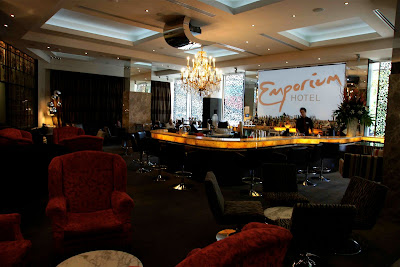 4. Emporium and James Street
Fortitude Valley has long been the Bohemian style centre of Brisbane but recent developments have added to its fashionable mien. The Emporium centre on Ann Street includes the beautiful boutique Emporium Hotel, a lane way shopping centre with great bookshops, restaurants, a paper specialist, a cute kiddies clothing store and the fabulous French restaurant Belle Epoque which offers a delicious date-topped creme brulee for dessert. Within walking distance is the James Street enclave which is firming up as Brisbane's key fashion shopping destination and is home to many more quality bars and restaurants. Perhaps one day, Auckland's town planners will create something similar with the Victoria Park Market area or the side streets of Karangahape Road... 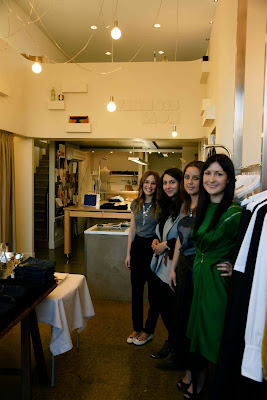 5. Francis Leon
James Street is also home to Francis Leon- Studio One. Francis Leon is one of Brisbane's rising fashion stars and was the clear standout designer at the Fashion Festival group show we attended on Saturday evening, although it was great to see local labels Zambesi, Kate Sylvester, Nom D and Cybele included as part of the Lylah Boutique show on the same card. Only three season's old, Francis Leon is the brainchild of high school friends and design team Jo Turner and Kate Lysaught and their third range, fittingly entitled "Three" was an accomplished range of sleek, chic, feminine casual-wear, dresses and jackets. Their store, which features a unique studio environment - the cutting table is in store - is creative and classy and they were warm and welcoming to the Kiwi contingent with bubbly and tasty nibbles. The girls stock World in their Brisbane store and are looking for New Zealand outlets...
6. Character
After living in Australia, and having spent much time there over the years, we are forever reminded of the Australian penchant for demonstrating and celebrating character. Australians love a good yarn, appreciate the manifold differences in humankind, and have a rich history of battler successes, survivor tales, and making good - call it the convict gene, call it Australian but it's a quality national trait. After experiencing the tourist hubbub of South Bank we decided to traipse out of town toward Woolloongabba to find a pub. We quickly found the Brisbane Brewhouse on Stanley Street, a very fine pale ale called BPA, and had the opportunity to meet Ian and Heikki (above with Rachael). Ian came and sat at our table and we were soon deep in conversation. His accent tweaked our curiosity and before long he had us embroiled in a game of "Where was I born?" It took us a full twenty minutes to ascertain, after he made a triangle sign, that he was born in Bermuda, the sharp 80-year-old gave nothing away. Ian had spent 40 years working in the publishing industry, in several countries, and spotted Rachael's Penguin classic The Philosophy of Andy Warhol in her bag. Over a few pots he regaled us with stories of Sir Allen Lane, Penguin's founder, the peculiarities of bookstores in Dunedin and Invercargill and the profound effect the world's only steam clock in Vancouver had had on him as an 8 year-old. Heikki had come to Brisbane in the 80's after watching ultra Aussie Paul Hogan's TV show because he said his native Helsinki, Finland "was freezing." What a pleasure...
After a few days, Brisbane really does feel like Australia's new world city.
Posted by Front Grill at 8:54 PM