Is that you Johnny? Thom Kerr and Lindsay Rose ask questions... 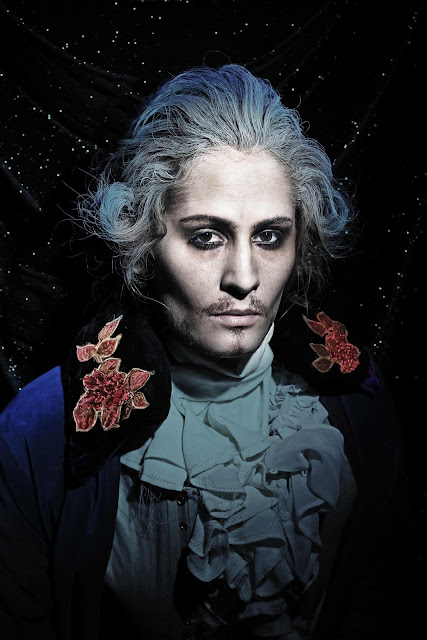 We've decided to use Blacklog this year to place some of the content from Black online. So here in the first of a series of excerpts from BLK #18, is Johnny Castrati!

You may be asking yourself, who is this handsome fellow you see before you? Why does he look so familiar? Often you read various deconstructions about the science of beauty. Theories on how the symmetry and shapes of facial features play a key role in our subconscious idea of beauty. Take our subject for example. Spend a moment to scan over his portrait and appreciate him - he ticks all the boxes. Dreamy eyes, a strong jaw line, a healthy mane of hair. He definitely possesses a certain movie star quality about him. For those of you curious, his name is Johnny Castrati and he’s been causing quite the stir across Australia’s burlesque scene. Attaining the status of heart throb, you’ll often find Johnny serenading women on stage or speaking of love lost on the open seas. But I’ll let you in on a little secret. Johnny is a fictional character created by comedic actress Lindsay Rose. Yes, you heard me correctly. Johnny Castrati is played by a woman. So we thought it more fitting to ask Lindsay to interview Johnny, to get a sense of the woman behind the man or... um... the man behind the woman? You get what I mean.


Lindsay Rose: Tell me a little about your origins? Johnny Castrati: I was born in the 16th Century in a tiny village in a mountainous region of Italy named Depp. It rests by the valley of Clooney, amid the forest of Orlando which blooms by the Pitt River. The town is called Banderes. The people who live there all look the same. Even those who have photographs on their tombstones look like me. Pop cultural hybrids. As if every romanticised character in this dimension, true or false had their essences dreamt upstream into our ancestor’s tap water. The result was a bloodline fit for Mills and Boon. I often tell my audience that I am a pigment of their imaginations. Not a figment... but a colour, a hue or even a shade. So you are centuries old then...how are you still alive? What? You don’t read Ann Rice novels? Ha! Let’s just say that I eat well. I don’t sparkle in the daylight, but I do at sparkle at night. The side effect of sequins. How long have you been in the musical theatre business? Well, my beautiful friend, I have been performing since the 1600’s. I was first trained in the Vienna Boy’s Choir whereupon showing promise of great talent and success, I was made a Castrato so that I could have a career and support my family. We Castrati’s were the rock stars of the time. We had the power of a strong male voice and the soprano range of a woman. Our voices were said to have healing qualities and we were highly sought after lovers. Firstly, because we lived lives of abundance and exuberance. Secondly, and more importantly, because we did not tempt the fate of fertility. But times change and so a dandy must change, too. I moved into various vaudevillian roles over the years, dancing between opera and musical theatre. In recent times, I found work in Wiemar Cabaret in Berlin and have skipped the globe ever since on the small stage and festivals with burlesquers and circus folk. This seems a strange path to take, from the highest regard in theatre to tiny stages in darkened bars in Sydney. Did something go wrong? There’s not much money in live performance anymore. The craft has fallen on hard times. The Goddess once ruled the world. Special attention was paid to the arts of Artemis and Aphrodite - religious deities of passion. Over time, I have witnessed the Goddess become overtaken and overpowered by the demons of money and the Gods of creative ineptitude. Punters stay home and watch reality tv shows about morons. Aphrodite has been cast into the corner bars and underground venues. It is here that she and her followers reside. She is a burlesquer, a stripper, an escort into a truer reality in which each artist expresses their vulnerabilities. It is more than just choreography or reciting words. It is an intimate delivery of their inner most dreams and demons. So, what defines a “real” alpha male? Are you an alpha male? I used to thrive in a time when men were colourful peacocks. We wore make-up and wigs and had our own hosiery. Now when I express myself this way, I won’t walk through a park alone at night for fear of my life. If only sword fights were still legal! The world boasts that we have come so far in our thinking, and yet in many ways we are still in shackles. Man and woman. False ideas of strength and power. Who was the first girl you fell in love with? The first girl I ever truly fell for was a wildly audacious blonde by the name of Terese. I met Terese when I was sixteen. I was in love with her for a summer before her family moved to France. She had a talent for bluffing her way into anything she wanted. She came from a well to do family with old money. It would have been an easy task to dislike her for the assumption that all things were hers to have, but it was her bargaining of charms which brought the art to her ways. Her flirtatious manner was spellbinding to all she swindled. Even the man she made most a fool, forgave her. She was an enigmatist. What qualities does the ultimate woman possess? Aha! This must be a trick question! Every woman is the ultimate Goddess, so long as she believes it to be so. Every woman is beautiful and intelligent and kind, so long as she knows that she has the choice to be so, regardless of her situation. Courage is the defining factor - the courage to make it so. This was Terese’s Midas touch. She understood and then it was so. Did you ever have your heart broken? My heart has been broken, torn, shattered, bruised, you name it. I am no stranger to it. I have come to accept impermanence. You might say that I’m fatalistic. But it is a sweet surrender. When I breathe in the effects of it I am able to renew my love over and over.