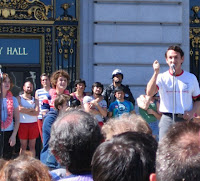 One of the movies I’m most looking forward to seeing over the next few months – or whenever the hell it reaches New Zealand! – is Milk, which chronicles the life of Harvey Milk, the first openly gay man voted into U.S. public office who was assassinated in San Francisco in 1978. Directed by Gus Van Sant and starring an Oscar-worthy Sean Penn, this sounds like one hell of an important film, especially in the light of the recent Prop 8 madness. Check out some of the reviews:

Rolling Stone
There's really no maybe about Milk, directed with a poet's eye by Gus Van Sant from a richly detailed script by Big Love writer Dustin Lance Black. It's a total triumph, brimming with humor, heart, sexual heat, political provocation and a crying need to stir things up, just like Harvey did. If there's a better movie around this year, with more bristling purpose, I sure as hell haven't seen it.

New York Magazine
Milk is a hagiography, but there’s nothing wrong with that if you believe, as director Gus Van Sant and screenwriter Dustin Lance Black obviously do, in the gospel of Harvey Milk. And queer hagiography is bracingly different from that other kind, in that it’s often, so to speak, ass-backward, the road to rebirth leading through the flesh instead of around it. There aren’t many life stories of saints in which the hero’s salvation begins with picking up a studly young Midwesterner in a New York City subway station on the eve of said hero’s 40th birthday.

NPR
What sets this film entertainingly apart from most civil rights sagas, though, are a slew of relaxed, offhandedly persuasive performances, along with the flamboyance of hippie-era San Francisco. And of course there's Penn, who's so engaging, physically loose and just plain smart in the title role, he's bound to top everyone's shortlist come awards time.

The New Yorker
[Milk] wants what straights take for granted: the ability to live without shame. By casting a famously macho actor as Harvey Milk, Van Sant has made the central humanist desire for self-acceptance and pride newly powerful. Giving himself utterly to the role, Penn takes an actor’s craft and dedication to soulful heights, making a demand for dignity that becomes universal.

The Los Angeles Times
There's nothing terribly wrong with "Milk," it's just that its celebration of a culture and a neighborhood, its valentine to the early days of gay rights activism, is mostly more conventional than compelling ... It's impossible to see "Milk's" anti-Prop. 6 demonstrations, to read signs saying things like "Gay rights now" and "Save our human rights," without thinking of the very current battle over Proposition 8 and its ban of gay marriage. This graphic demonstration that the struggles are far from over gives "Milk" a harder edge than its otherwise self-congratulatory tone could manage.

The Boston Globe
The movie makes it hard not to see in him a little of Barack Obama or vice versa. The similarities are chilling at times. They both ran as agents for change, a message that drew people to them, especially the young, and managed to win the support of folks in spite of their own bigotry. What you're able to see is how far the country has come in four decades and how far it hasn't. The day of Obama's victory, voters also supported gay marriage bans in three states. Go figure.
Posted by Helene at 10:56 AM