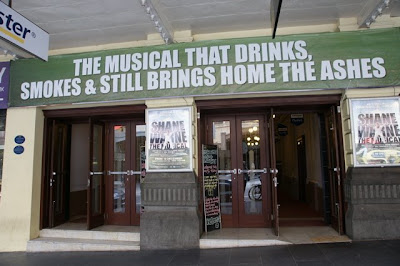 Sorry we have been a bit quiet here on Blacklog over the past week or so - we have been trapped in a Chicken coop - firstly here at The Powerstation and over the past week in Australia, culminating in a performance at the Homebake Festival in Sydney which was all rather massive and headlined by these guys the Crowdies...Will pop up some posts shortly but in the meantime ponder the picture above. Yes, in Australia they create musicals about um, er...bad-boy cricketers, albeit legendary ones. Just where the song comes into spin, or the beat into batting we really don't know. Going to see a musical about Sir Richard Hadlee would be about as exciting as eating a cold porridge sandwich. Only in Australia...
Posted by The Churchword at 2:34 PM