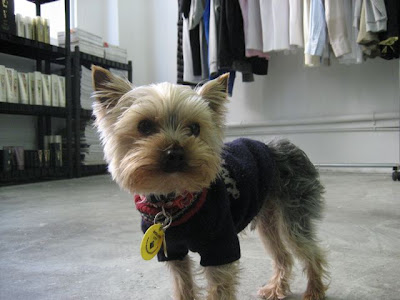 Our favourite little dog in the world, the fashion wonder dog known as Olly has been busting a move down at Stardogs. Olly is officially the website's Dog Of The Month which is something akin to Employee Of The Month except Olly doesn't work,  or need to, he just is.
Olly has his own website too [although we suspect it was set up by owners Murray Bevan and Anna Fitzpatrick] which features a lookbook of the stylish chap impeccably dressed and pulling some pretty cool stances.
He's a natural and although it's early stages yet, we think he's a claw in for Dog Of The Year...
Posted by Front Grill at 11:35 AM