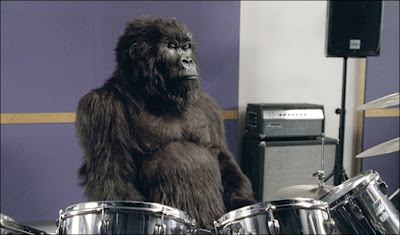 It's not often that an ad gets better with every viewing and being a former ad man, I know that is the ultimate aim of the curious amalgam that is advertising - to find the place where true creativity gallops along on the commercial horse - and everyone is happy. Iconic ads are gold for the advertiser and the viewer alike and these ads are almost always based on humour. Add the emotive in music and you just might have a winner. I first saw the Cadbury Dairy Milk ad on You Tube about six months ago and loved it. The ad originally aired on UK TV in August 2007 but - as is normal for Antipodeans living in the Shakey Isles - has only recently screened on NZ television. I have now seen it about six or seven times on the box and I'm finding myself increasingly entranced by its simple charms. I also find myself wondering about how it was made. Did they get Weta Digital in NZ to provide the King Kong head? What part is a guy in a gorilla suit and which parts are animitronics? Is the actor in the suit a real drummer? 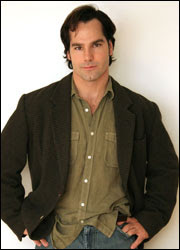 Well it seems the man inside the suit is Garon Michael, a professional gorilla actor not a drummer at all who had to learn to drum the classic Phil Collins roll. The Superman lookalike has appeared in numerous hairy films including Congo, Instinct [Anthony Hopkins] and of course Planet Of The Apes alongside Mark Wahlberg. Michael says the Cadbury ad was "his most gruelling role yet" with no less than 40 ninety second takes required. Hot work in a hairy suit, although he had a video screen inside the head to work with. Fluids are a necessity and provided through a straw into the beast's head [which is covered in yak hair by the way] and the facial close ups are motorised and controlled by two puppeteers.

When asked what he thinks of the ad himself, the well-trained ape man sweetly replies " The sight of the gorilla drumming along to Phil Collins should make you smile, just like a slab of Dairy Milk."