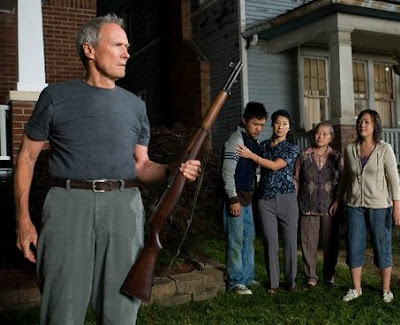 For a long time now - too long, of course - I've been wanting to spend time visiting the elderly in their nursing homes. I'm assuming they'd want my company, of course, but I think there's nothing sadder than being alone, and to be alone when you're old and have so much to share, and deserve such respect and admiration, is the saddest thing of all.
As much as I want to do something nice for the people who may not have friends or family to visit them, I also want to spend time with characters, with people with great stories and even greater wisdom. If I could design the person I'd like to visit, their name would be Walt Kowalski. He's acerbic, he's blunt, he grunts and snarls and by God he says the most hideous, inappropriate things - and yet he is a great man, and completely lovable.
Walt is the character played by Clint Eastwood in his latest directorial effort, Gran Torino. It's a terrible, uninspired/uninspiring title for the best film I've seen in a long time - and that's saying something.
If for nothing else, see the 78 year old Eastwood in what may be his last performance ever - and what a performance it is.
Posted by Patsy Galore at 11:25 PM