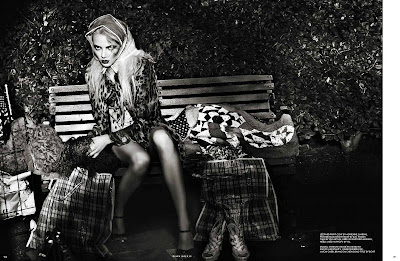 Well we're happy to say that Black 12 is now at the premises of our esteemed printer McCollams in Auckland's Mairangi Bay. It's nice to smell the ink again. Sorry we haven't blogged a lot lately, we simply haven't had the time. The mag will be on sale around Auckland next weekend and nationwide the following Monday. Next week, we are going to Rosemount Australian Fashion Week as guests of Mac Cosmetics. There are some great designers showing over the ditch so we'll blog as often as possible. In the meantime, here's a few spreads from the issue, we'll post a cover on the weekend.
This image is from a spread by New York photographer Michael Schwartz. Shot in L.A, in a park at night with model Sharon Van der Pas. It features styling by Tasha Cain, hair by Martin-Christopher Harper and make-up by Carolina Deli-Tesch.
Posted by Front Grill at 11:13 PM