A Wolf, That Looks Like A Librarian (with a gun), In Sheep's Clothing 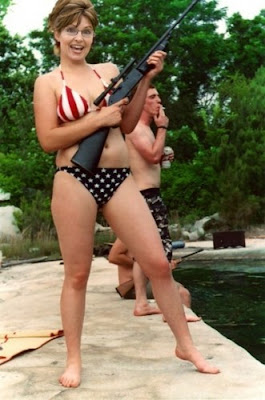 Talk about instant fame! Arriving from the Wild North West on a farm bike in her patriotic (probably Photoshopped) bikini is Sarah Palin, flaming Alaskan Governer and sudden running mate to John McCain on the Republican ticket. A potential US Vice President. Looking at this picture and reading about her in the past week, she probably shot the aforementioned wolf - or maybe one of her gun toting, fag-chuffing buddies in the background accounted for it - but there's no doubt the rotting carcass will still be out there. In the BUSH. Like all things Bush, Republican and US administration of the past 8 years, what they say is not what you get.

The NZ Herald, or rather their relieved correspondents, were effusive in their praise of Palin and her eagerly consumed VP speech at the Republican conference this week. It was a speech which was quickly considered a satisfactory answer to the history-making speeches of Obama and the Clintons, and the general staging of the Democractic conference in Denver, Colorado a week earlier. No contest I would have thought, but many other commentators here and abroad have been quick to jump on the New Republican bus, albeit a three day old one since Palin's instatement. As if to prove that nothing much is changing in the Republican camp, I watched this week as McCain embraced Palin's 17 year old daughter Bristol (siblings include Track, Trig, Willow and Piper) and her partner Levi Johnston, 18, at an airport. It was a tender PR moment after the couples unplanned pregnancy had threatened to usurp Palin's speech the next day. Palin and husband Todd (the First Dude) looked on encouragingly as McCain clenched the children's arms as if to say "Here we all are, honest and real. Our kids, good kids, the future of America."

Whatever (Old Dude). In reality it appears to be the same old, same old. Father-to-be Johnston recently described himself thus on his MySpace page, although it has now been blocked: "I'm a fucking redneck. You fuck with me and I will kick your ass!" He also says that "he doesn't want kids." Ahem. McCain's own insipid speech, following Palin's 'triumphant' oratory, attempted to somehow suggest that the Republicans, after 8 years in office, would be bringing change.

As the billboard should say..McCain/Palin. Change. Yeah Right.
Posted by Front Grill at 7:11 PM