Grey Lynn to East River and back; Stefan Sinclair by Adam Custins 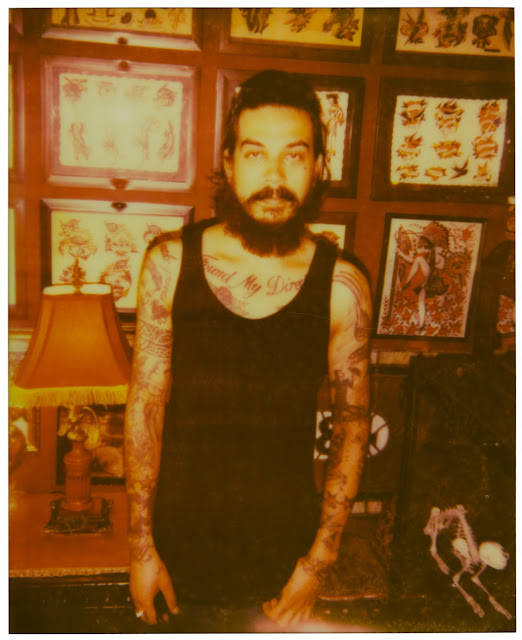 Story and photos by Adam Custins

Born and bred in Grey Lynn, Auckland, Stefan Sinclair has been a tattoo artist for the last eleven years. He began out when he was about 22.  "After high school, I thought I'd next go to Elam, but I had hated being in school so much that university just felt like going back to school again; so I took a year off." During this time, Stefan was getting alot of tattoos done for him self, and one day was talking to the artist working on him, and listening to his story realised that this was a job he could do too. Stefan loves the fact that being a tattoo artist allows him to "work with an ancient craft, doing honest work, while trading art for a living." This ancient craft has brought him to New York and other cities around the world, sometimes for month long guest spots / residencies / other times simply to explore his craft as an artist. During the Northern summer of 2012, I met Stefan at “East River Tattoo” in Greenpoint, Brooklyn. This was the second year Stefan has gone to New York to become absorbed into the local tattoo community, and share his work with fellow artists or those wanting to get work by him.

Stefan's love affair with New York started when he was ten. He'd been given a book: "New York from the Sky" and he would practice his drawing, by copying the buildings, like the Empire State, Statue of Liberty, and so on. He also stuck the pages from the book on his bedroom wall, and pretend he was looking through windows out to the New York skyline. Now finally making it to New York, Stefan has appreciated the time he has had to develop his craft, grow technically, and most importantly: artistically. The local community of artists, and tattoo shops have welcomed Stefan, and he loves that people are so helpful. Compared to New Zealand, he says that "people are so critical, and extremely competitive: no one wants to help you out. I have not set foot in another tattoo studio, in six years." Stefan looks forward to the day when he can spend more time in New York, while still growing his New Zealand business.

Once he'd decided to follow the path of becoming a tattoo artist, he decided to get his own gear, but this was very difficult at the time in New Zealand. In fact tattooing was an incredibly difficult industry to get into, as there were only a handful of established shops and the community was very tight. To buy tattoo guns he had to travel to Austalia buying them from a man who built his own, John Entwistle. (sp?) but once he got home to New Zealand, he still had to learn how to use them. "I had to teach myself: I'd had the gear for a year, but didn't know how to use it. I started by tattooing a skull on my leg." Already good at drawing, Stefan was suprised at how he had to learn how to draw all over again on the human body. It took him about a year of practicing on friends, doing simple jobs, and hanging around every tattoo shop in town before he got the basics and was eventually offered a job at one.
"I was a punk as a kid, always on the fringe. Punk culture was associated with tattooing, and for me it offered an alternative career." Stefan recalls how as short a time as ten years ago, he would walk through Smith & Caughey, the large department store in Auckland (NZ), and have the security guard follow him around, just because he was showing alot of tattoos. Now, tattooing has become mainstream, and has lost some of its rebelliousness.

Today, Stefan owns his own tattoo studio in Auckland, New Zealand, called "Two Hands" which employs seven artists. Between managing his business, Stefan also does residencies in Melbourne, plus his visits to NY and aims to add London to his roster. Ironically, while New York and specifically Brooklyn is the epicenter of tattooing, possibly in the world at this time, you get a sense that truly getting a tattoo is no longer a rebellious act. While I was sitting in the shop as Stefan tattooed his client, two other people come and go, nonchalantly adding new tattoos to their already prolific collections. One guy clearly has been collecting for year's as his slightly dated tribal-sun attests: while the rainbow haired-hipster-punk client gets a Wright Brothers plane added to her wrist, a couple of positions below a hot air balloon on her shoulder. It's just business as usual. Stefan discovered East River Tattoo studio via Facebook; appreciating the similar style, feeling and aesthetic of his own work and tattoo shop. Stefan's specialty work, is the "traditional western style." Prior to opening his own shop, Stefan worked in six or seven shops, where he learnt Maori, and Polynesian styles, and he says he can get by in the Japanese style, however these days, he generally only works from his own designs in the traditional western style. This means that he uses alot of black ink, in bold lines, with some black shading. If he uses color, it's a maximum of two colors per piece. Our conversation wandered around the edges of tattoo history, and for someone like me who has never had a tattoo, but intensely loves their aesthetic: it was fascinating. Stefan told me that between the late sixties until the late 1990s, tattooing was illegal in New York. Any artist who hadn't moved out of state to continue their business, could be found at Coney Island, or in the Bowery. The revival of the NY scene now centers around Brooklyn. We both agreed, that we'd never seen so many people with so many tattoos, as we had in Brooklyn, and most specifically within the greater Williamsburg area, beating New Zealand where the statistics are something like one in five people over the age of eighteen are tattooed. 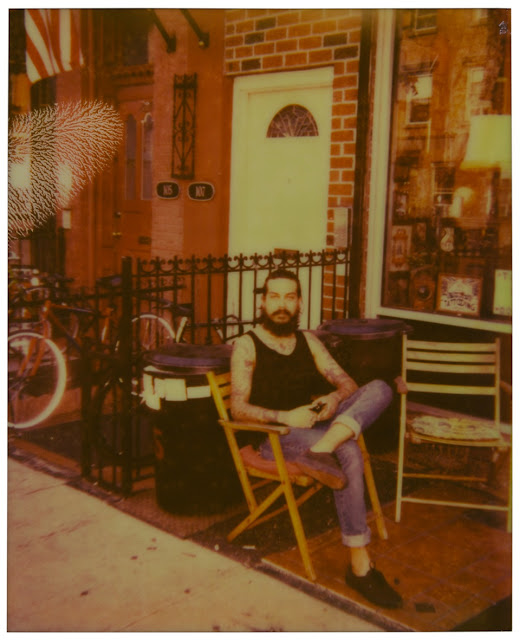 Stefan commented, that in his experience, clients will walk in spontaneously and ask for a tattoo on the spot, where as his NZ clients tend to take longer, with initial consultations, returning later for the work, thus, drawing out the process. Overall though, he believes that the public have grown a much better understanding of what a good tattoo ought to be: the different styles, and design schools, and that the quality of art and technique is far superior to how it used to be in the old days. I asked Stefan how his personal style had evolved, and if he could describe it: the answer was surprising to me. Captain Cook, during his Pacific voyages rediscovered tattooing, sparking a European renaissance. Up until this time, tattooing had disappeared, but when Cook's sailors, and it is rumored Cook him self got a tattoo, the art became an upper class fashion for a time, culminating in European royalty seeking out tattoos both there and in Japan. It is even rumored that Queen Victoria had two tattoos. The Traditional Western style that Stefan specializes in is based on this nautical history, from designs handed down from generation to generation. He showed me a sailing ship design on his own arm, that is a classic design by the famous "Sailor Jerry" a tattoo artist active from the Second World War, to the 1970s. Stefan prefers the traditional style because it doesn't age, and the work will always look classic. Stefan is Maori, (native New Zealander) and has taken the classic designs such as the sailing ship, and created new designs featuring Maori motifs, such as an outrigger canoe, or other classics such as Sailor Jerry island women, giving them Moko, (Maori tribal facial tattoo) but all still in the traditional western style.
This is the first time, such designs have been created as far as Stefan is aware.

Fast forward to this year, and Stefan and I talk again. I ask him to reflect on this last trip to New York:
“I think I got to know New York so much better in that last trip, it began to feel like a home for me. I'm looking forward to returning in September this year. But the incredible summer we've had here in Auckland has reaffirmed my plan to work towards 6 months over there and 6 here. New York doesn't have Auckland’ss relationship with the ocean which is so important to me. But of course (NY) it has that energy that Auckland lacks. I love both cities equally.” Stefan is about to open a new shop: “Flash City”. In his words: “Flash city is a barber shop and walk-in flash-only tattoo parlour, right next to Two Hands Tattoo which is my custom-only tattoo studio. It is a one year pop up store and features hundreds of hand painted mostly classic tattoo designs displayed on the walls, all of which will be lightly customized when tattooed. The tattoo artists include most of the team from Two Hands as well as a rotating roster: some of the worlds best tattoo artists starting with Bert Krak of Smith Street Tattoo in Brooklyn, who arrives on Monday (1st April) and he will be the resident tattooer for the opening week. The barber shop is quite traditional, offering $25 cuts as well as hot and cold towel wet shaves. We will also be serving Supreme brand filter coffee with free refills in those American style diner mugs, making it the only spot on the block (maybe the only place on Ponsonby Rd) doing filter coffee.

I basically set to work on creating flash city the minute I got back. It is largely inspired by my experiences in New York and by one tattoo parlour in particular that I visited while there. I also researched a bunch of barber shops while in NY. The past 3 months I've been working 7 days a week: 5 days on painting flash in my backyard shed and 2 days tattooing at two hands. I set what I now realise was an unrealistic goal of 100 sheets of flash in 3 months, but I've completed 74 which I'm very content with. Ps: flash is a sheet of paper, usually A3 or similar size, with tattoo designs on it. Traditionally tattoo shops had flash up in the walls, and those were the only designs you could choose. The practice went out of fashion, but is now growing in popularity again.”