Ciao Baby, You're Under Arrest 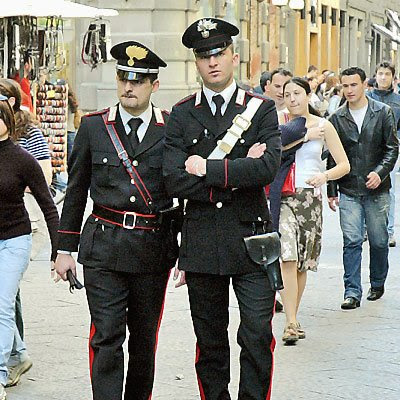 Only in Italy! It seems the ruling Berlusconi Government has become a little paranoid about what it forsees as 'security threats' and is giving mayors of Italy's numerous regions and towns carte blanche to create their own 'security laws'. Italians have always been known for their flair, creativity and sense of fun so it is a little humourous to read about the veritable giant pizza of new laws that have already been introduced to basically control, err...fun. Planning to sun yourself on Olba Beach, Sardinia? Fine, just don't light up a fag or you're coming down the nick to be slapt with a 360 Euro fine. All kids must be muzzled and staked to the ground on beaches in Eraclea near Venice as those dastardly, extremely dangerous sandcastles are now banned for fear that they may 'obstruct the passage along the beach'. Scarily, it is now also illegal to wander away from most beaches in your bikini or shudder the thought, budgie smugglers - again, the cops will shackle you. Sophia Loren and Gina Lollabrigida will be shaking in their towelling two pieces. It is not just the beach though where casual humans risk the wrath of the fun police. Parks are dangerous too. In the city of Novara, two people can sit on a park bench and canoodle but if a third joins them, and it's after 11pm, all three of them are suddenly breaking the law. No worries in Viareggio though, as many people as can fit on a park bench are able to do so, until...one of them puts their foot on said park bench - resulting in an instant fine. Worst of all bag ladies and bird lovers, those most dangerous of citizens, are no longer able to feed the pigeons in the city of Lucca or they could end up hundreds of euros poorer. The good news is that in true Italian style many of the new laws will probably never be enforced, they're just there to show that something has been done to address the 'security issues' but woe betide the pigeon-loving threesome having a smoke on the park bench, having wandered up from the beach in their togs!
Posted by Front Grill at 10:13 AM