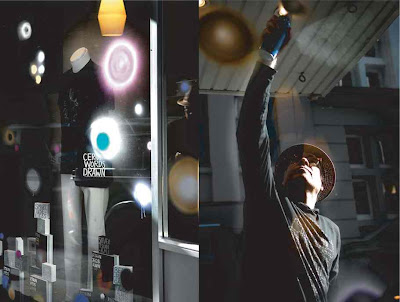 One of New Zealand's longest standing fashion-art collaborations goes one step further with the release of New zealand artist and icon John Reynold's book Certain Words Drawn and the simultaneous release of a limited edition Workshop T-Shirt range featuring Reynold's prints. Workshop and Reynolds have worked together in this vein for 20 years. An entire section of the book is dedicated to their relationship and includes photographs of Workshop/Reynolds garments including Architectural Weave, Rockpool variations, Crazy White Folk and the politically inspired Ta Ra Ra Boom Decay print.
Over the years both Workshop and Reynolds have clearly enjoyed exploring the moment where fashion meets art. As well as being a fine artist, Reynolds has a way with words and phrases which clearly lends itself to display on your chest. Significant past collaborations include; the image of episodes from Giotto's Scrovegni Chapel overlain with spidery Batman forms, the dense rubber doily patterns and simple acronyms. The 1992 Corbans Fashion Show saw Workshop and Reynolds at it again with one of the labels most recognisable and memorable pieces - the Rockpool prints on linen shirts. Many made it to the office workspace breaking up the sea of bland white and blue shirts on offer at the time. The original Workshop Newmarket store also featured a giant Reynolds work on the wall. Unable to leave it behind the Cherry's re-installed the entire plaster artwork at the current Morrow Street site.
There are five of Workshop's favourite Reynolds prints available, one of which, The Rockpool is available in both mens and womens T's. Mens T's feature the Doodle and Crazy White Folk prints and womens features another variation of the Rockpool and Miss Behaving.
The John Reynolds collaborative T shirt collection is available at Workshop now as well as a unique and individually signed numbered artist edition of Certain Words Drawn which comes with a commemorative Workshop Denim tote bag. Both Auckland stores also currently feature installations created by Reynolds and Arch MacDonnell - his collaborator and the books designer.
So get on down to the Workshop stores and do a little collaborating yourself by taking home a limited edition Workshop/Reynolds.
Workshop City - Cnr Vulcan Lane and High Street
Workshop Newmarket - 18 Morrow Street, Newmarket
Posted by Front Grill at 11:43 AM